Posted on September 6, 2014 by rootietoot

Yesterday I saw a picture of some young boys (2-8, roughly) sitting at a table drawing pictures. in the middle on the table was a cigar box filled with crayons, and there was a pile of paper, and other drawing stuff. 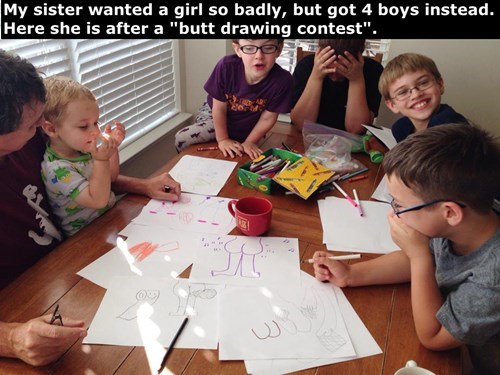 I was kind of overcome with a sense of nostalgia, and started wondering if there would ever again be a cigar box of crayons (remember that smell? The waxy aroma of a new box of crayons?) in the middle of my table.

When the boys were young, there was a Craft Box I kept for rainy days and emergencies. Mostly it was  a pipe dream, concocted out of the mind of a female who had such things as a young girl, because the boys weren’t interested in most of the stuff in that box, the ribbons and confetti and glitter. They preferred the pipe cleaners that could be twisted in the the shape of a gun or a sword, and the paper that could be balled up into hand grenades (when it was too wet to go outside and use pinecones). The glue was ok, too, because it could be poured into the hand of whoever was sleeping. The crayons and markers were good, because there was one boy who loved to draw, and another one who loved to count. They also make good missiles.

Here’s a story on the one who loved to count, it was a harbinger of Things To Come:

He was not quite 3, and we had purchased one of those big boxes with 64 crayons in it. He was unimpressed with the variety of colors, but was fascinated that they were separated into  smaller boxes. After counting that there were 16 in each smaller box, and noting that there were 4 boxes, and seeing on the side of the big box that it contained 64, he asked Himself if that meant 16×4=64. He was assured that it did, then we both alternated between extreme pride and mild panic. He is now approaching 25, and in engineering school, and loves all things math.

The one who loved to draw (he was approaching 5) couldn’t care less about the math of it all, but carefully arranged all the colors by type chroma and hue, which made for a very pleasing and artful box. He is 26, and still has a strong sense of what is aesthetically pleasing.

The youngest one was around 1 at the time, and determined that crayons weren’t as tasty as red clay from the yard.  He is 23 now, and while I am pretty sure he doesn’t eat dirt anymore, I know that he is usually covered in it.

Anyway…seeing that picture of those boys caused nostalgia and a little bit of anxiety and sadness, and maybe worry that there won’t ever be little ones sitting at the table, with crayons and paper, and will there ever be pictures proudly displayed on the refrigerator door, held in place with all those magnets we’ve collected over the years?

I hope there will be some children around here who will be excited about getting into a box full of stuff, messy things like glue and glitter and scissors and markers, and creating Works of Fine Art when it’s too hot to go outside.

Some of the best memories I have of the kids being little involve the kitchen counter, crayons, and paper. It would be nice to have some more.

I do what I can.
View all posts by rootietoot →
This entry was posted in Uncategorized and tagged Kids, perspective. Bookmark the permalink.